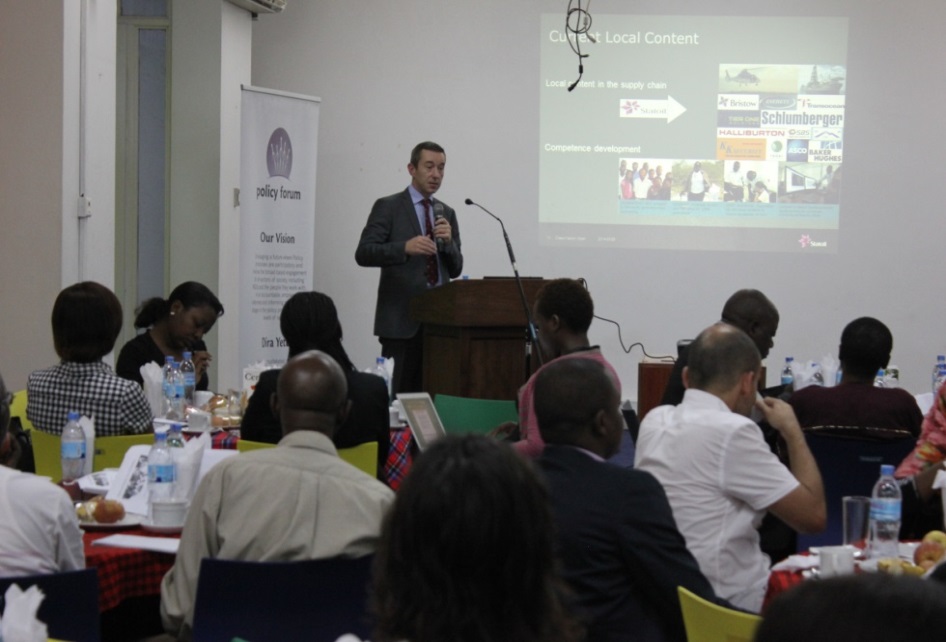 With new found gas reserves in Tanzania, there has been adequate talk of how the extraction of the resource can be maximized for the benefit of locals in the country. Observers have called for Government to demonstrate high commitment towards enhancing local content in the sector and international oil & gas companies to demonstrate the concrete steps they will take on this including  development of human resources.

To contribute further to this debate, Policy Forum organized a breakfast talk on the subject and invited Statoil, a leading energy company in oil and gas production, to discuss their strategic approach towards local content enhancement.

Statoil states that it is keen to contribute to and document socio-economic development in the countries where it operates through local procurement, local direct and indirect employment, local infrastructure development, capacity development and social investments.

Speaking at the event which took place on 25th April 2014 at the British Council Auditorium in Dar es Salaam, Mr. Harald Back, the Supply Chain Manager at Statoil said that Statoil’s local content strategic approach allows local suppliers in the 35 countries it operates (which includes Tanzania) to compete and is used by the company to negotiate with the government on certain issues related to oil and gas production.

He concluded by saying that an optimal level of local content will require a co-creation approach with the government of Tanzania.

The discussant of the event Miss Neema Lugangira Apson, a local Content Expert who recently launched her book titled: “Local Content in Supply Development” which originates from her MBA thesis and is being disseminated so as to promote understanding of oil and gas supply chain industry requirements and preparations for supplier development. The book states that Tanzanians will benefit economically and socially from the industry if they are made aware of the benefits that such preparations demand including increased capacity and competence of the local suppliers.